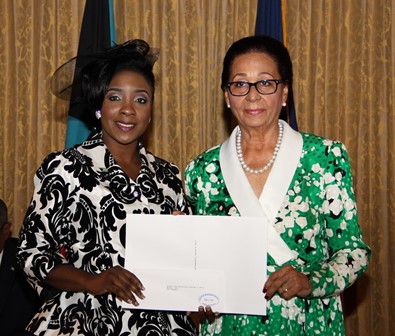 NASSAU, The Bahamas – Attorney Lanisha Tamar Rolle of the Opposition Free National Movement, left, was presented her Instruments of Appointment as Senator by Her Excellency, Dame Marguerite Pindling, Governor General, during a ceremony at Government House on Tuesday, February 24, 2015. (BIS Photo/Letisha Henderson)

In the aftermath of Hurricane Dorian, The Department of Inland Revenue wishes to advise all VAT registrants operating businesses on Abaco, the Abaco Cays and/or Grand Bahama that the filing of VAT returns due September 21, 2019 and October 21, 2019 have now been extended until November 30, 2019; for businesses requiring an extension. Click the link below for full…

The Ministry of Finance will roll out a provisional business license in the New Year to significantly reduce the time it takes to start a new business. This addition was approved by Parliament during the 2018/2019 budget exercise, and will be implemented by the Department of Inland Revenue in the first quarter of 2019. Click…